All trail rides, are race days! OK,  my random thoughts...

1. Where did I meet Ty and Matt (on different days).  Sam Houston trails.   And I nearly killed myself both days.  Shortly after meeting Ty, he was chasing me, I think he thought it was a race!  As soon as I took the lead, he sped up, and within a minute I felt like I was being chased by the cops.   I was trying to go fast and definitely trying to stay out front.  Keep the rookie in the dust.   I mean, keep the dirtbike rookie in the dust.   This lasted a few miles, then I wheelied into a long huge mud hole and went over the bars.   That was a very appropriate introduction.   In the future I would spend a lot of time, energy, and advil  chasing him through those woods once he found his mojo on a ktm set up for the trails.

2. And the first day meeting Matt.  Typical. 95 or 97 in the summer.  At the Sam Houston.  Ty says a guy from his neighborhood is going to meet us in an hr.   So we hit the westside trails.  I think Ty thought it was a race.  As usual, Ty was leading, I was just back a little, trying to stay on pace but just out of the dust.  Quickly realized that forgetting my camelback was a grave mistake.  After a fast loop in the heat, returned to the parking area to meet matt.  I already was feeling cold and sick, def overheated.  Met matt for the first time, and he loaned me a new camelback to put my filthy mouth on so I would have water for the next loop and not die.   That's the kind of nice fellow he is!  Would loan you anything, and do it with a smile.  Friendliest gentleman in texas!  Texas board of tourism should put a pic of Matt and his bike on billboards in other states with the line "come on yall, lets go ride!"

3.  Best start:   Ok, so I am not good at race starts.  Actually quite horrible.   I normally line up on the outside and let everyone pile up inside turn one, and go around them on the outside, and Im ok with that strategy.   My best and favorite start, was at Middleton at an Otis race.  Misty and Tys mom watching etc.   Ty lines up way inside (like any normal pitbull racer) and Im last guy on the outside of the row.  Im saying a short prayer.  Asking for energy, wisdom and some gosh damn luck..   Dead engine bomb run to T1.  Flag drops, I kick and even I was shocked and surprised that I got the jump and had clean air going into 1.  click gears, look over a little to the right and sure enough out of 8 or 9 people on that row, Stranger is even with me both starting to turn in.  Now since I had the big line, he had to pinch it down a little harder on the inside of the turn, so I was able to cruise that 90 deg right hander with more speed and come out clean and wide in first.   I had the biggest damn smile and ENJOYED that lead for at least 3 or 4 seconds before he blew my doors off.

4.  Which reminds me.  If anyone ever says, hey lets go for a ride or lets ride some trails.  That's not what they mean.   When someone from Bent crew emails you that, I quickly learned, that is a serious invitation to a non sanctioned speed contest on a non controlled, bi direction trail with head on traffic...  After racing hare scrambles from 2002 to 2016, I honestly can say that I literally banged more bars, been run off the trail more time, been pushed wider, have run through more packs of cattle at speed, had more close up encounters with damn pine trees (and injuries), and been put on the ground on my ass by Bent riders on "trail rides" than all the real race events.   I would always drive back home smiling, thinking, these guys are nuts.  these guys are fast.  really fast.   they think its a race.    and that's the critical thought.  if you want to understand him/them on a bike, that's the key.   all smiles.   Till the helmet goes on.  Then its race time.    "jerk that pistol and go to work"

Ride with Ty, its a race.  Ride with Matt in the dez, its a race.  Ride in NM with Jim, its a race.   After two days riding with Bishop in his woods, I lead exactly zero times.   I stayed behind everyone, sometimes being polite, acting like the guest.  One time I got on it in deep sand.  Figured I would flex some sand skills.  Jim vanished.  Gone.  Destroyed me.

5.  Enclosed a pic.  After driving 12 hrs from damn fort Stockton to Laughlin NV, we are sore and tired.  Very ready to get out of the truck.  From pitch black dez, drive into the city lights and neon pulling the trailer and dirt bikes to Laughlin for a hare scramble.  We turn into the casino front entrance and this little car flies by us, locks the parking brake, spins, blocks us.  Now for a split moment, I thought it was roadrage and maybe matt upset someone driving down the strip.  Im shocked nobody in the truck pulled a gun.  Turns out it was TN Don and ZipTy!  Dammit.   Ty jumps out of the car, my stomach is in a knot cuz I thought it was fight or flight time.   Ty jumps out holding a beer in one hand and hands me a whiskey with the other.  LOL  These guys/you guys are all the best teammates one could hope for. 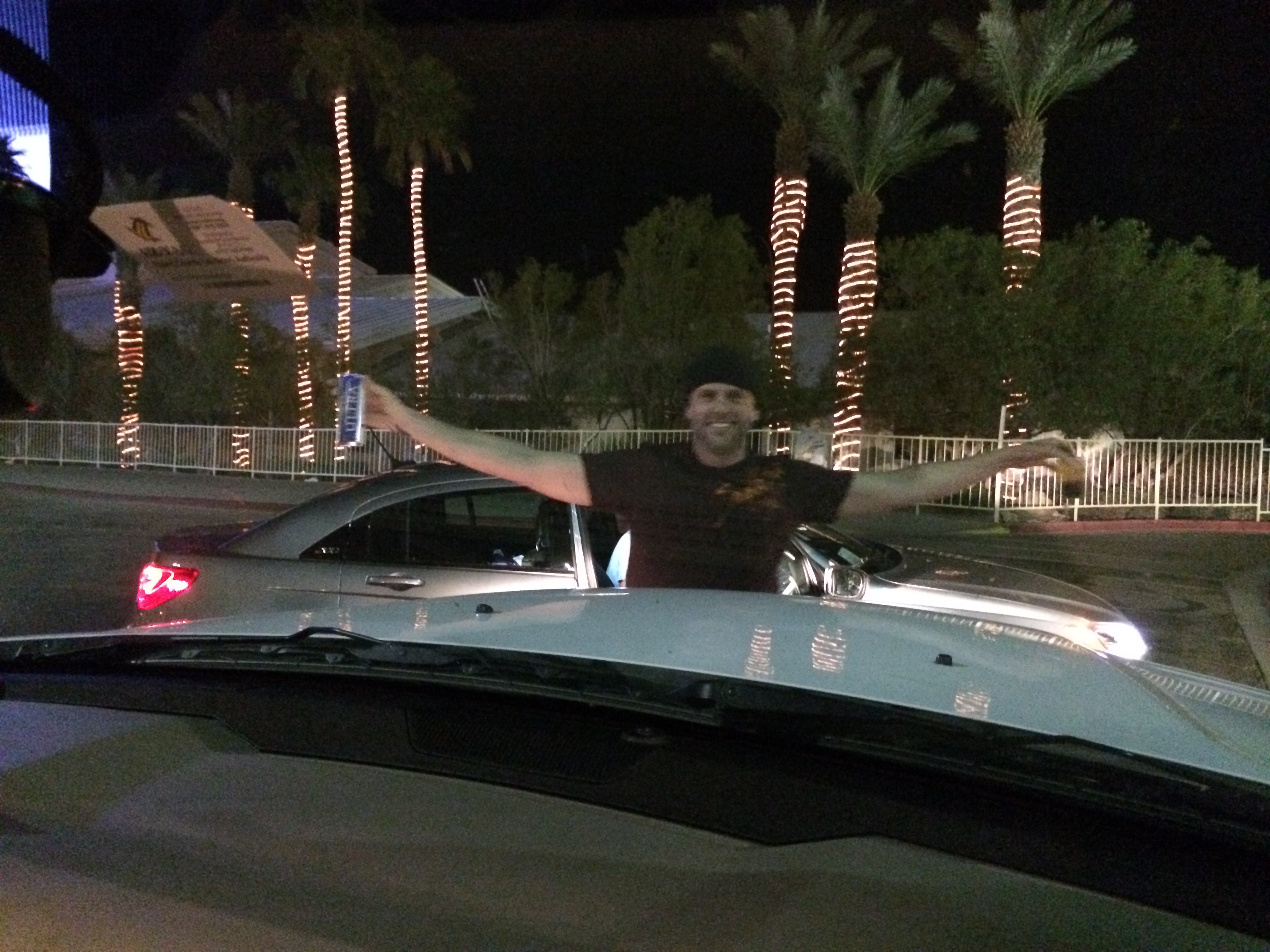 6.  Speaking of Laughlin.  Where did I meet Jim, when we picked him up on a different trip to do a hare scramble, he was our supreme pit boss and refueling master.   And TN Don, met him to race dirty bikes.   And Slade too!  on a dirt bike ride.   And TX Pete, riding bikes at Cherokee.   Where minutes after meeting Pete, he ran me wide in the woods and put me off the trail in order to complete a bullshit pass that he initiated too late but muscled his way through.   I nearly ate bark.   I was pissed.  Back at the truck I complained to TY about Pete.  Ty basically said something to the affect:  suck it up, these guys ride hard, its always a race.  which is good because you never have to wonder or guess.  They always want to drink the most beer, or give the biggest insult, eat the hottest food and they ALWAYS want to show you they are a little faster.  LOL   I love it, and it made me a better and stronger rider.

7.  How fast is Ty.  Well with me on a 300 and him on a 250, I could hang and 25 to 50% of the time go a little quicker.  Then he discovered the 300.   I finished behind him 97% of the time after that!   On equal machines, I was toast.  I needed an unfair advantage to stay in front.  And he is sneaky!!  You see him the night before the race walking around with a beer! Ha!  He has been know to walk around with beer bottles filled with water.  And then he would go to bed and leave Misty out with me to keep me up later, having one more beverage so I was good and tired the next morning.  Sneaky!!  lol   Another "he thought it was a race" time.  I bring a 300 to the woods.  Matt and Ty show up on big 690s.  I figure this will be fun, deep sandy trails and they are on 300 lb bikes with DOT tires.  Truth was after a mile or two, I realize I was scared.   I was riding my complete ass off and every time I looked back, there was this ktm 690 flying up on my tail like he intended to run me over and spit me out the back.  And if I didn't look, I heard him there, inches from the rear tire laid over in turns.   That's when I realized just how far his ability really surpassed mine.  I couldn't shake him.   I wasn't in the same league.   I think he thought it was a race...